Seller: kortul
information about the seller and its items 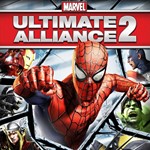 UNLEASH THE GREATEST SUPER HERO ALLIANCE EVER. Marvel: Ultimate Alliance lets players create their ultimate team from the largest superhero alliance ever as they engage in an epic quest to determine the fate of the Marvel universe. Players can create and control their own completely unique team, selecting from the largest roster of legendary superheroes ever assembled in one game, including Spiderman, Wolverine, Captain America, Ironman, and The Thing. Through the epic campaign, the heroes will battle, team-up, and interact with over 140 characters from the Marvel universe and ultimately confront notorious villains such as Dr. Doom, Galactus and The Masters of Evil.

• Customize your team. Use a universal team upgrade system to balance your heroes´ powers, or customize each member to maximize their effectiveness.
• Change the course of the game. Control the fate of the Marvel universe. The missions you accept, the objectives completed, and how you interact with other characters throughout the game will have a direct impact on how the story plays out.
• Fight in no-holds-barred combat. With dynamic combat capabilities, Super Heroes can fight while airborne, on the ground and even submerged underwater.
• Cooperate or compete online. In addition to engaging in the epic single-player storyline, you can converge in battle, online or offline, against the world´s most evil Super Villains. Switch between cooperative and competitive mode to partner or challenge up to three other players.

The Marvel Universe is being torn apart. The Superhuman Registration Act becomes law and Super Heroes must register as weapons of mass destruction, becoming licensed government agents. As Civil War is stirred, Iron Man leads the Pro-Registration side while Captain America spearheads the stand on Anti-Registration. The enemies you battle and the missions you accomplish depend on which side you choose.


1. After payment you will receive a link to activate the game to your Steam account.
Please first check that you are logged into the Steam account you would like to activate the game to.
2. Copy paste the link into your web browser address bar and follow it.
3. You will automatically receive a notification on Steam that you received the game. Now you can add it to your library or store it in your Inventory to activate later.